Our service and products

SOLACEM S.p.a. manages its own goods unloading and storage services based on the precise division of the spaces inside the port of Torre Annunziata.

In particular, the Levante pier dominates an impressive silo for the storage of cereals, and a complex of refrigerated warehouses for the storage of perishable goods such as sugar, flour, pulp or products for animal husbandry, while the Crocelle quay is used for the storage of aluminium and other steel materials, in a video-controlled fenced area.

All the equipment used for the handling and logistics of the goods are subject to constant maintenance and technological innovation, providing a great return in all port activities involving the landing and storage of products. In particular, structures such as the bucket/hopper shover or the dedusting hopper are essential resources within the SOLACEM s.p.a.

At the Levante pier towers a silo among the most modern and efficient in Europe: supported by a fully automated PLC controlled landing system, it was demolished and rebuilt from scratch in 2014. The structure, technologically advanced , is formed by 50 cylindrical cells 40 meters high, each able to contain 900 tons of goods, for a total capacity of 55,000 tons.

The silo is mainly aimed at the storage of cereals for human consumption, which are transferred from the ships and stored in the cells through two suction towers, which reach a capacity of 600 t / h with a yield of about 4,000 t of goods per day. 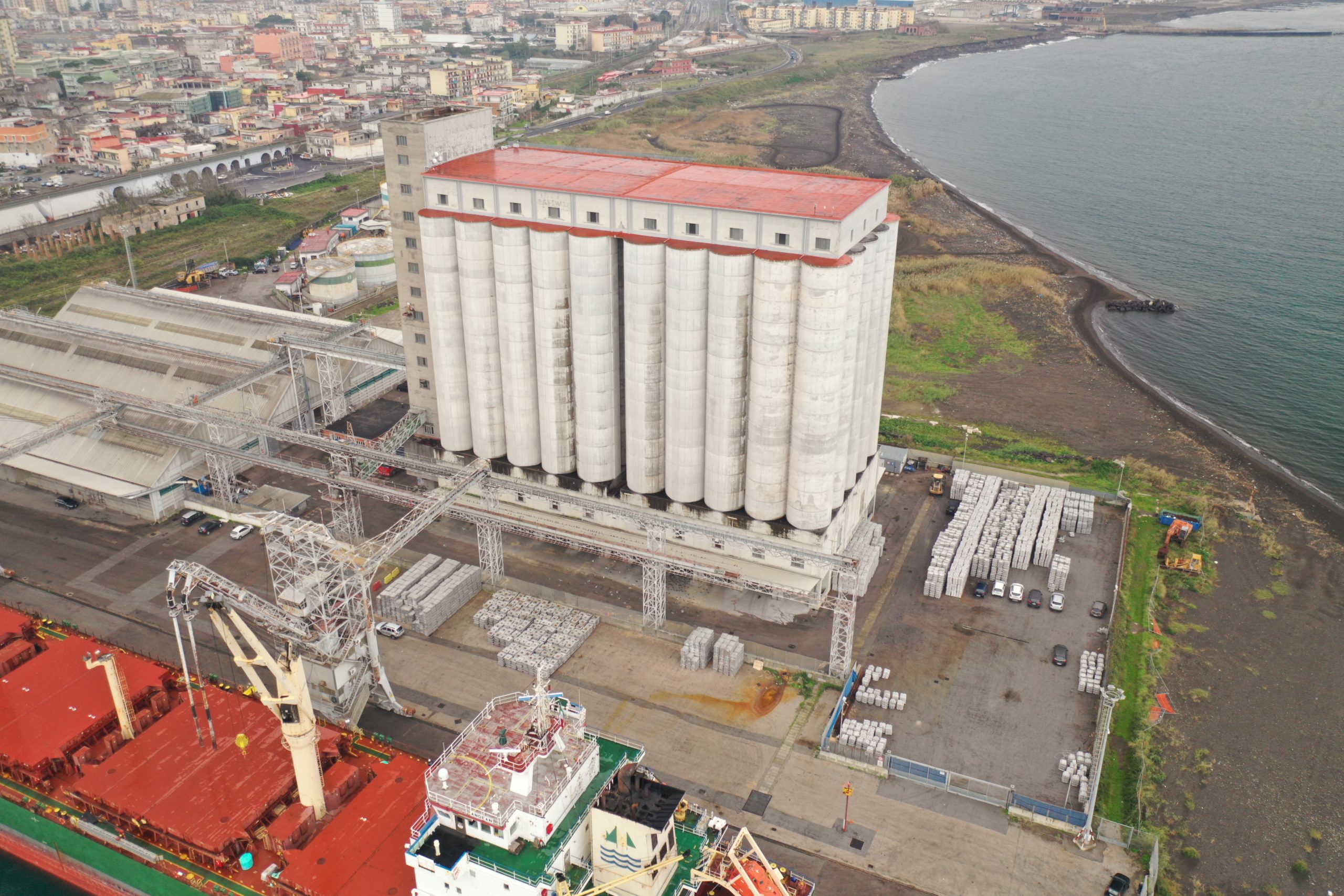 In an area of about 6500 m², adjacent to the silo, there are three sheds equipped with a refrigeration system, suitable for storing perishable goods such as sugar, flour, pulp and products for animal husbandry.

The division of the warehouses into seven metal compartments allows a precise and careful organization of the goods, to satisfy every conservation requirement and favour a greater optimization in terms of quality and productivity. 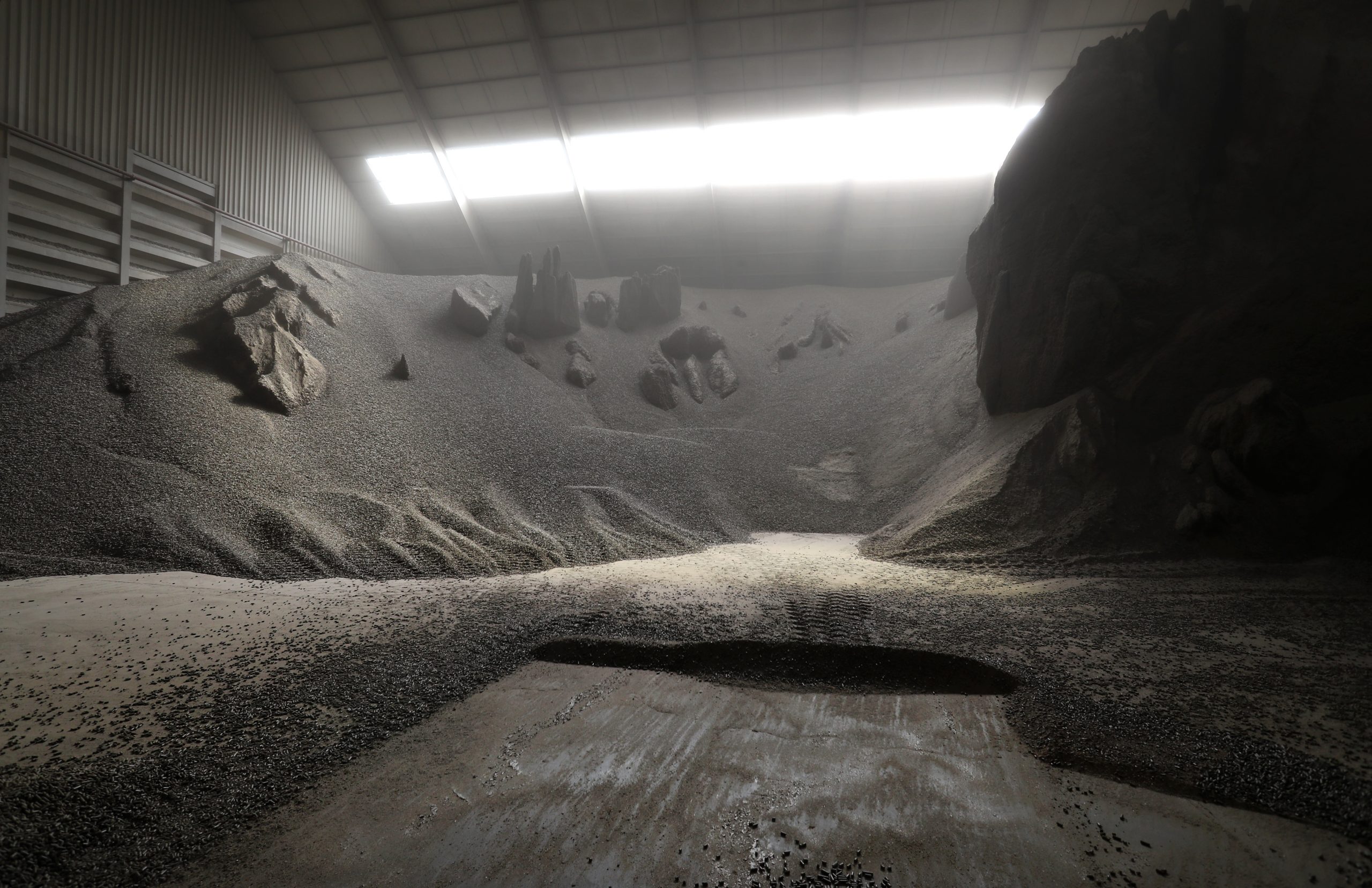 On both sides of Levante and Crocelle dock there are two large open areas for the deposit of break-bulk cargoes. The surface of this area reaches 9000 m² and can accommodate materials of various types from containers and traditional ships, adapting perfectly to every need.

The area is completely fenced and video controlled, ensuring a high degree of security and discouraging any type of criminal activity within the port of Torre Annunziata. 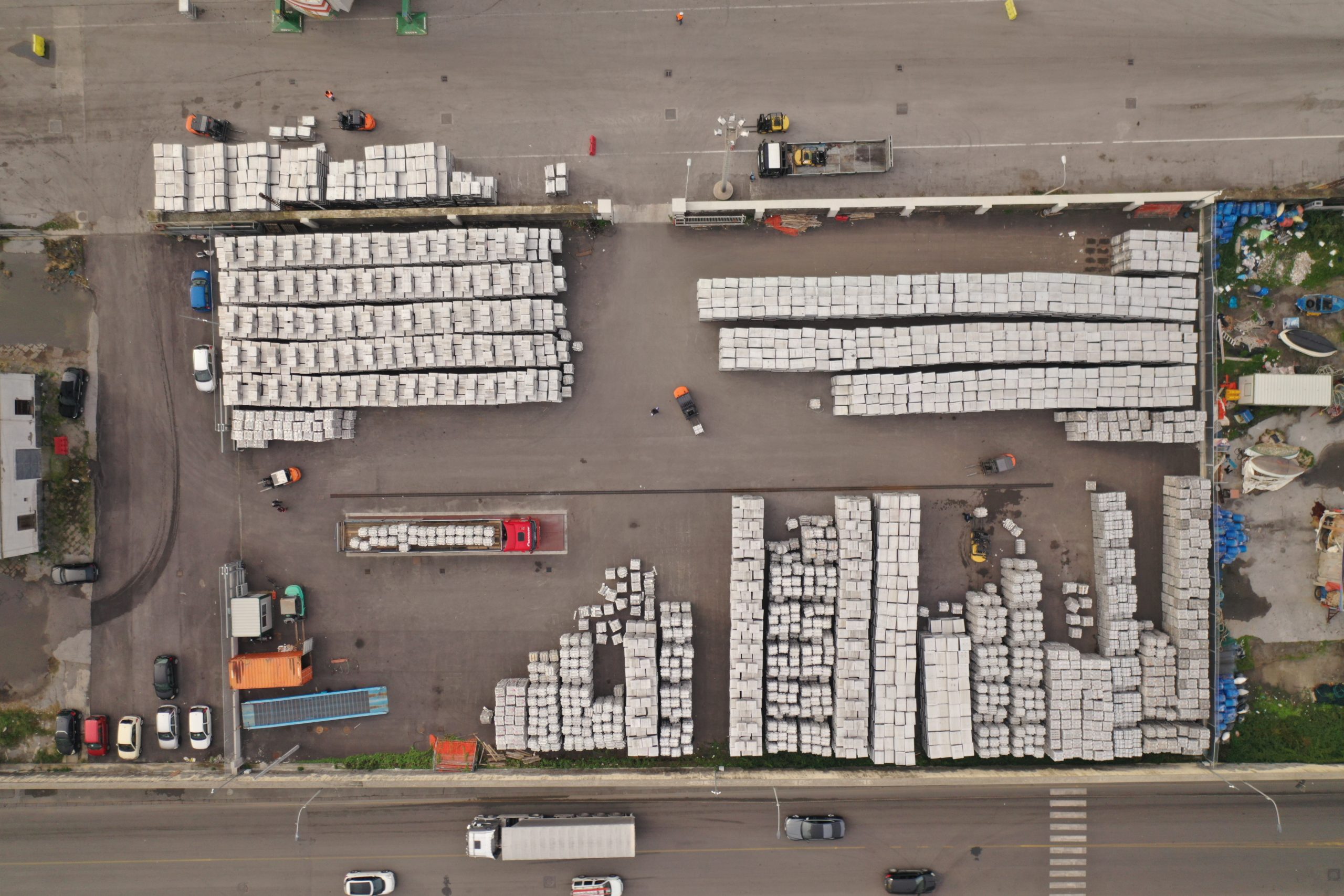 The landing of cereals and flours is carried out by two mobile towers on rails connected to the plant by conveyor belts of over 900 m, all managed by 2 PLCs interfaced with weighing scales. Once introduced into the beans, the stored cereal is returned on trucks by direct fall from the 50 silo sampling points; as for the recharge of flour from the sheds, 3 mechanical shovels are used with large buckets, one of which is equipped with a bucket / hopper for loading the tankers.

The landing of cereals is carried out with the help of small but powerful bobcats which are lowered in the holds of the ships in the completion phase of the landfill, while, for the landing of flour, special tracked mechanical shovels are used from the beginning of landfill operations. For the break-up and unloading of break-bulk ships, two wheeled cranes, with a capacity of 70 t each are used, as well as a series of forklifts with a capacity between 2.5 and 5 t, used both on board and on the quay for accommodation in the open service area.

The emptying of containers, started in 2017, takes place through a special ramp that allows forklifts to directly access the container and to empty it without unloading it from the vehicle. 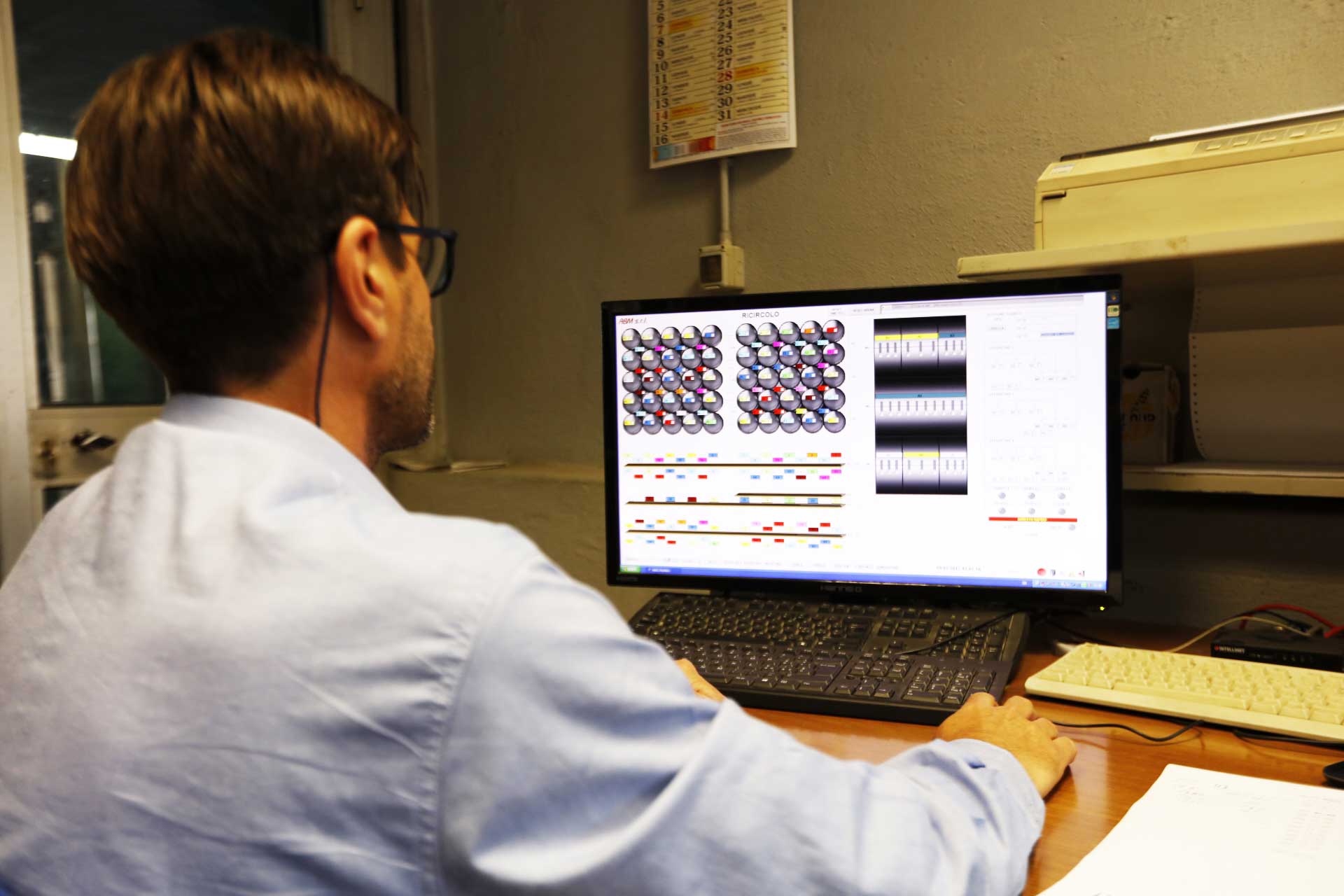 The equipment for the management of the entire processing cycle (unloading, storage, weighing andloading on trucks) includes high-tech equipment.


• 2 landing towers equipped with 4 powerful exhaust fans for unloadingships, with a capacity of up to 600 t / h;
• Over 1000 linear meters of chain conveyor belts;
• 2 introduction scales for continuous weighing of incoming bulk cargoes;
• 1 80-tonne weighbridge;
• 4 wheel loaders with a capacity up to 5 t;
• 1 tracked mechanical shovel;
• 3 mini-blades for operations to complete the landing and clean ships’ holds;
• 2 port cranes with a capacity of up to 40 t;
• 5 forklifts, one of which has a capacity of 30 t and four of 3 to 5 t;
• 1 bucket/hopper shovel - flagship of the machine park - to insert, directly and without any waste, the cereals and the flour in the tanks. 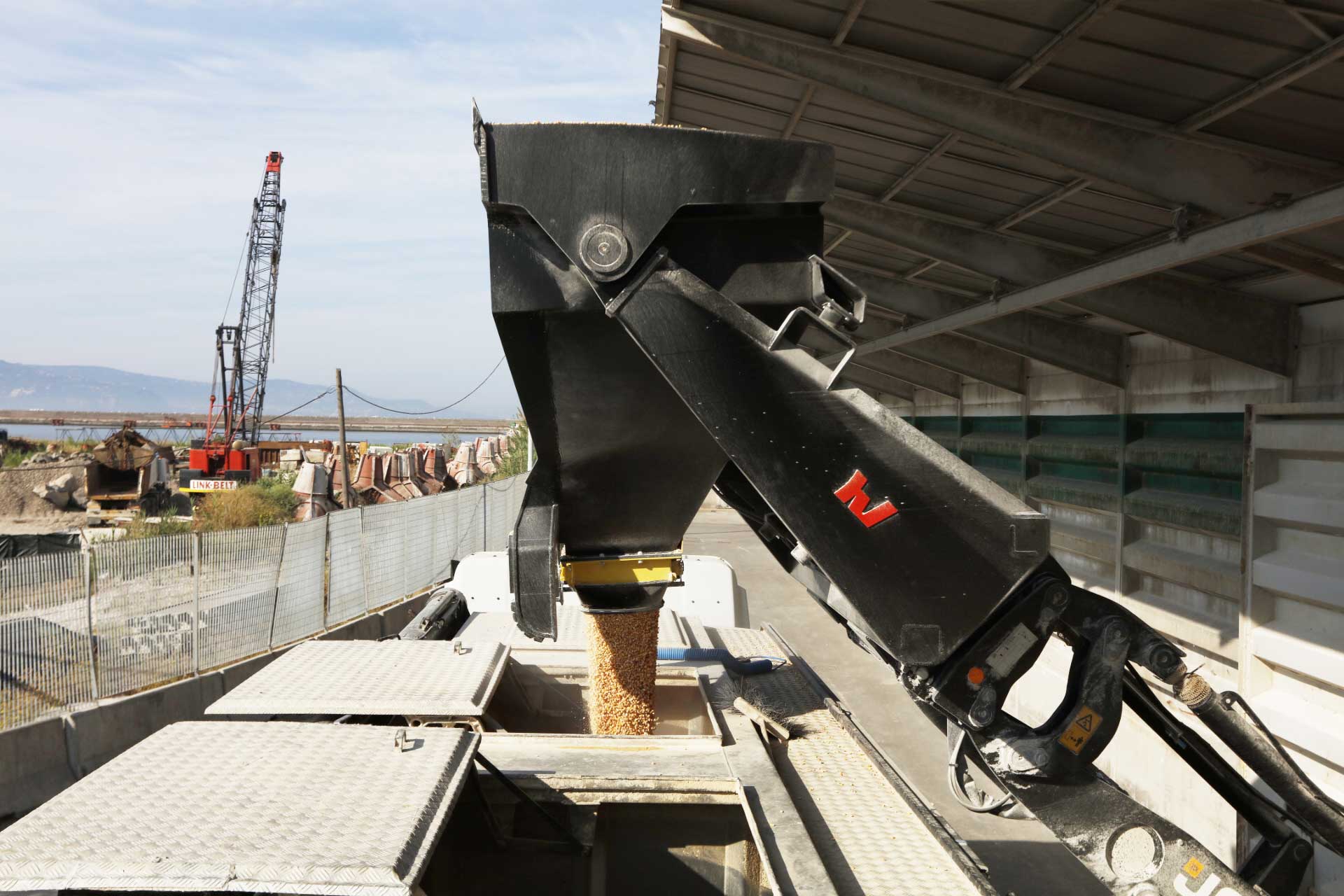